HOW DO THEY THINK CONSERVATIVES HAVE FELT THE PAST TWO HUNDRED YEARS?

Bring back dueling. Let’s see them mouth off in people’s faces in ‘protest’ then.

Sounds like self-loathing to me. What do you think is wrong with your skin colour? Why are you incapable of laughing it off?

Look at the hatred for the people around them.

This and other forms of anti-national (treasonous) sentiment, vindictive vitriol aimed at their fellow Europeans/countrymen, have been on full public display, completely shameless, for a number of days now. I’ve seen expressions of confusion that Leave voters aren’t speaking up. I’ve explained this before. We’ve been watching and waiting and crucially, listening. The silent majority, recall? We are quietly noting who is with us and who would have us thrown in prison for disagreeing with them.

They’re planning on rounding up who they believe are the leaders and we see the pathetic attempt at bait, as they hide behind police and other paid guards.

Fell right into the hands of UKIP and Britain First. Well done Britain, you disgust me https://t.co/bbP5J1Vrel

This bloody xenophobic racist outright disgusting hate filled country. I WILL NOT hold back on telling leave how they've fucked this up.

Guess which ones of the two groups we’ll help in times of civil unrest.

Damn you all to hell.

Come friendly bombs and fall on Slough! / They cast their votes for Leave and now / the bigot's mark is on their brow. / Swarm over, Death!

Why are all these old white people cheering and dancing, you'll be dead by the time we leave mate

Leave people of color alone you awful weird racist white people. It's all old white people cheering and I'm uncomfortable on so many levels.

We all marvel at how the people preaching “love and tolerance” are the ones slinging hate and wishing death on OAPs. So brave. Such progress.

We’ve tried reasoning, it falls on deaf ears. Slowly, the people who enjoy the country they live in are learning you cannot reason with these people (SJWs mostly). 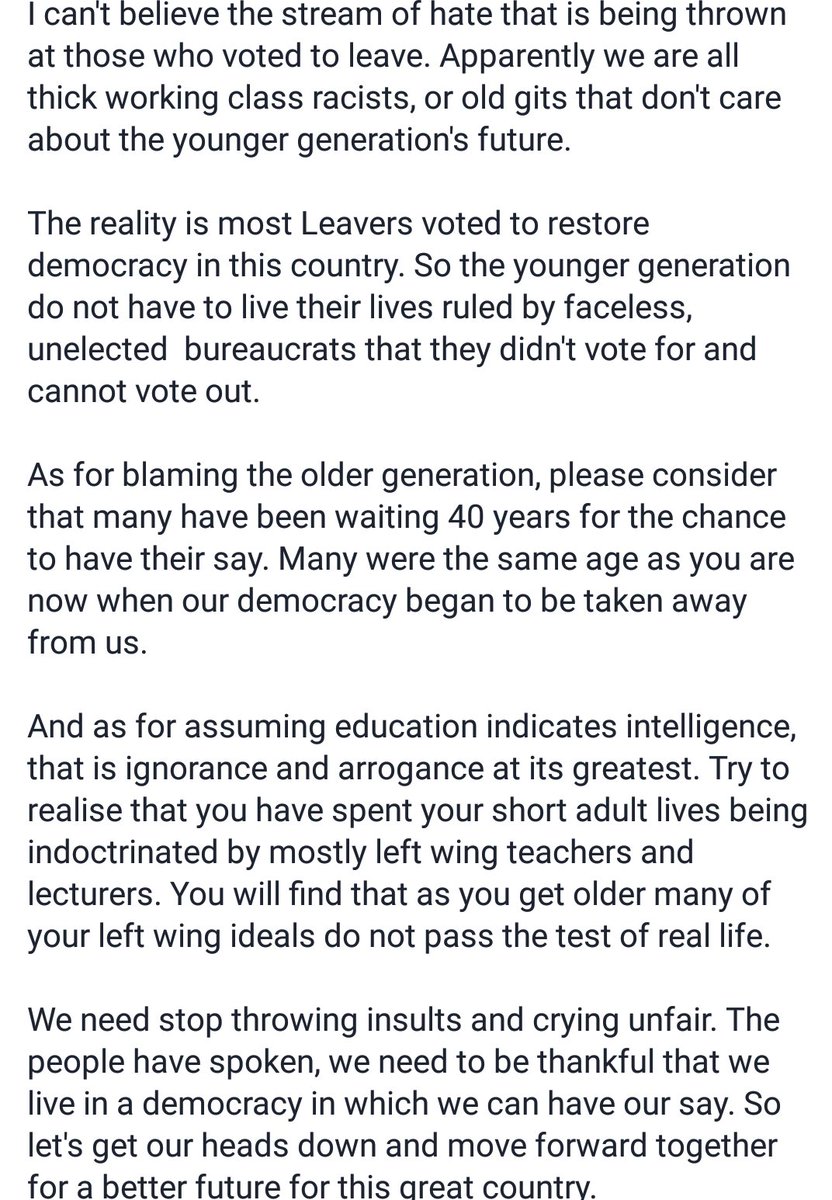 We are slowly learning we don’t need to justify ourselves to our supposed betters.

If you have NO IDEA why 17million people voted to leave, or think ALL those people are stupid or racist, you've become the bigot you despise

The rabbits don’t realize they are making enemies. In fact, they believe being the last one shouting IS the victory.

We all know a 72 year old racist that voted leave

Really, they’ve been drawn out kicking and screaming. They’re standing in the middle of a circle of silent spectators. They misinterpret the silence, now they are being judged.

If you voted leave because you're a racist bigot who thinks immigrants are stealing your jobs, you can go jump off a bridge.

The racist contingent of Leave voters are not going to be happy when they find out EU membership was not the cause of Muslims.

Bad times are coming for Muslims in Europe. This is just the beginning. Future generations will learn about this day in school #Brexit

Keep drawing fire, by all means. Go ahead. Tell us all exactly what you think of us. We’re all perversely enjoying the fact they don’t hold back anymore. The narc rage is something. They honestly believe a little blip on the stock market and a descriptive word is the End of the World. These are sheltered spoiled brats.

Even if it weren’t about them, they’re used to crying victim, so they’d make it about themselves.

When you need something, we’ll demonstrate what we think of you.

The more the EU tries to ruin the UK, the further it will galvanize the silent majorities across Europe. They shall see the EU does not practice the unity and kindness it pretends and elect to leave sooner while they still can, than get dragged into an unwinnable war with Putin for that dense bullfrog Merkel, meanwhile terrorism, gang rape and recession paying for Greek people who’ve been pensioners over half their life again.

4 responses to “Leftists feel the same censure as everyone else, finally”