They always have been, where have you been?
It isn’t a gender-exclusive thing. It’s status signalling.

One of the biggest myths is that geeks are always harmless and never aggressive, but passive aggression is more insidious. The delta and gamma are the type of person who’ll get angry when you reject them, feel as if you owe them and do most of the serial killer stuff. The jocks will probably just shout and punch you in the face, then leave you alone. Geeks (and nerds) are not superior but they believe they are since they over-value intellect and pointless hobbies. Obsession is NOT a healthy thing. It isn’t the same as passion.

Just look at NRx modern aristocrat stuff.
They wear suits instead of sportswear. Same thing. All about peacock attraction because they’re the sex with less sexual options but more sexual desire.

Anyone who thinks they’re superior to you won’t make a good partner in anything, let alone life. And when they fail, they project, a lot. It’s never Mister Superior Intellect. There are plenty of jokes about Mrs Always Right but the male version is worse. All the bitchy, not even a woman.

It’s a way to compete dishonestly, covertly. As fake as those bulked up whey protein muscles, except they brag about all the books they read (and none of them surprising). As much signalling as the girls who brag about the popular title games they played.

The pretentious intellectual is worse than the gym bro, because at least the gym bro has external accomplishments and something to brag about. The pretentious intellectual reads the same books as everyone else and thinks they’re special for reading Dawkins, Greene and ‘old books’. Because who’d read that stuff if they couldn’t talk about it after? The pretentious people are hollow and have nothing original to offer, that is why they face constant rejection. They’re trying to imitate originality and getting angry when everyone is smarter than them.

Like, sure, they judge a woman as ‘worthy’ of his company and praise – if she completely agrees with him. Kant would be proud.

Okay, that is pretty accurate. There are more I can think of but I won’t derail.
I am surprised. I did not expect things that have been quantified e.g. interruptions in speaking studies, although men do speak as much by volume as women.
I think I can condense it down to two things.

First, they are usually treated as individuals rather than representatives of their sex.
Secondly, their comfort level is usually a default, so they don’t even notice it e.g. usually it’s a man in charge, so odds are he’ll also be heterosexual and therefore not creepily hit on you because you need his help. They don’t notice these things because, being men, they aren’t placed in those situations. It isn’t their fault when they’re naive to these things, as we’re naive to some of their insights. Fish in water problem. I wouldn’t call those privileges except for where they directly benefit at the expense of women for no other reason than birth (anti-meritocratic, sexual nepotism). However, to ignore that fact that Bad Things Happen in the world isn’t an excuse, and to deny them on any grounds inhumane. We founded society for the continual betterment of its inhabitants, that requires listening as much as we talk.

The ones about children irritate me because they’re based on received wisdom aka wrong but antique BS. Children require a nuclear family, minimum, to thrive best. An extended family is ideal but impractical. Both parents need to be involved and co-parenting isn’t feminist (that would be arguing children only need their mothers, against the evidence). It’s common sense that both sexes bring different traits to the table their child needs to benefit from, to say nothing of the two sexes OF child and the range of bonding required between the same-sex parent and the opposite sex through the stages of development. How can we build stable families in the West if we don’t work together? First, this requires communication, and that is two-thirds listening and one-third e-prime (not blaming, based on perceptions) e.g. I feel you are, You seem to be etc. Conflict resolution rather than escalation. Plenty of people nowadays cannot debate, certainly, but they cannot argue in their personal lives either. If you’re still angry, pick a violent hobby. Boxing is always popular.

Can I make the easy joke that the man was the better feminist?

I don’t see why a study of human differences has to be considered ‘feminist’ when really it’s actually a subject called BIOLOGY. If you want to be precise, much of this would come under social psychology and forensics.

It’s weird to see men, who usually go around spouting off on how different the sexes are, suddenly deny it whenever the feminists rarely admit it. Guys. They are by definition different.

These may not be sex differences a la HBD but that makes them no less valid. Social phenomena are important, from crime all the way to how people treat one another in a professional (supposedly non-personal) setting.

Fathers used to have a tendency to goof off in the upper class because they hired a retinue of staff to take their place. Not just women but also various men to teach and train their children, the tutor being the classic example. And no, the TV doesn’t count. If you can’t be there you shouldn’t have them, this goes for both parents although there is such a thing as too much Mummy, flexitime is the future, economically and socially. It’s no surprise that raising kids in a vacuum will screw them up, that isn’t one sexes fault, all of society is at fault (that means both).

In Victorian times, men began abandoning their families for drink in more urban pubs and bars, ‘throwing themselves away’ on it, and the modern vision of single parenthood emerged because the father was unconscious or …elsewhere. Addictions were common in men and excused for abandoning them on the regular because children were not considered full people, in part to deal with their mortality rate. Sometimes the women would die in childbirth, which is hardly their fault. Rarely one spouse would run away, often to America.

It is true that if men want the social power of the Master of the House, they need to be held to the highest moral standard. No affairs, no abuse, no addictions, the obvious. If they cared about their children above an egoistic promotion, they would spend their free time with them rather than playing the bachelor life (do you think the kids don’t notice?) I love the money excuse, when you can lose more with a promotion by moving into a higher tax bracket and in getting paid less per hour for the longer hours you’re expected to work. That isn’t an excuse and it misses the point deliberately. The studies have shown time and time again that children will always value time above money assuming a lower-middle class level of comfort. It’s an odd example of men trying to Have It All, or seem to, by having Work he hates, Wife he tolerates, Children he abandons and a debauched social life he pretends is good for his family, let alone himself.

How often do you hear parenting tips for mothers? All of parenting books and TV shows and so on, tend to lecture to women. It isn’t pandering, it’s telling us we’re faulty and need ‘experts’ plugging a book to tell us how to do the most basic human functions, it’s like eating! They lecture us, it’s trashy anyway.

How often do you hear lectures on fatherhood, and purposefully, what a good father is?

Almost like modern society is against happy families, because they fill that emotional void with credit-purchased crap on Black Friday.

But that’s none of my business America.

And no, telling men not to abandon their kids after willingly reproducing is not advice. For all the mean stereotypes, the black family model used to be quite stable with the Church before the men went out for mistresses a la the faux Bachelor Life. I’m sure on their death beds, they’ll regret going to less strip-clubs and paying for less drinks at a bar. 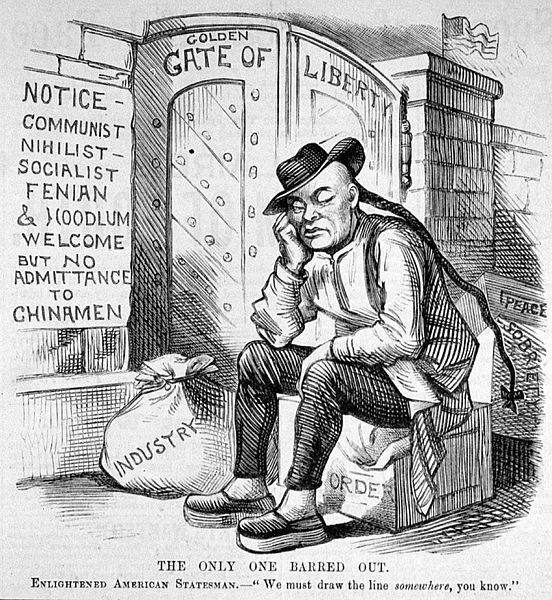 To prevent nepotistic competition, cultural swarming and mass immigration/invasion, the Chinese Exclusion Act did exactly what it sounded like, barring all comers until a repeal in 1943. The West frequently had firm control of its own borders.

They wanted the rules, they set the rules.
https://voxday.blogspot.co.uk/2016/10/actions-have-consequences.html

Meanwhile Vox Day continues to enjoy a temporary Quantum Whiteness, depending on his rhetoric.

Like how he claims to be European now, and still Native American. But Magic Dirt is BS.

You claim to be non-White, it’s a category error to speak on behalf of White people and what we ought to do.
You moved from your stated homeland to settle among us, while telling us to kick out the invaders.

He doesn’t want the Universal Suffrage of the West, like many ignoramuses who refuse to study our laws, but chooses to live here.

Doesn’t stop him talking about women either, as if he knows us.
Better than we know ourselves. <creepy gaslighting music plays>

Please stop, if you’re half the IQ you claim.

I refuse to explain the irrationality of sweeping statements. Especially when it involves at least three billion people. The sexes are more alike than the races e.g. siblings versus neighbours. This is common sense.

The evolutionary dominance of ethnocentrism from gifs

You aren’t friends with Whites until you can rib them.

You whine and cry about Christian societies, and yet you kept invading them and trying to live in them despite the fact that you were invading them illegally.

Projection? No… perish the thought.

There is nothing American about them but their paperwork.

What does your paperwork say?

Does the evidence suggest this?

The absolute best response possible from this….

The south east Asian country is a hotspot for peadophiles from the west, with more than 100 caught in the last two years from Australia alone.

(male rapists/rapists of men too, yes, but even those are usually male)

Human Rights!? People who act like wild animals aren’t human! They CHOOSE to act this way as well. They deserve to deal with the harsh consequences. I hope this law reaches all parts of the world. I am sick to death of people trying to defend these beasts and trying to claim that they are mentally ill. No – they are just criminals!

lust isn’t a curse, civilized men have no problems

western liberal democracies should be sitting up and taking notice-funny how third world countries can be far more progressive than the so called superior first world..

I said the West would crack down as a result of immigration, yes, that would apply to tourism into the East as well, you can be arrested in Singapore for hitting on the local women when they don’t want you to.
Naturally, the Yellow Fever idiots never bring this stuff up, but the military are warned.

The alt-right’s appropriation of the internet’s favorite frog hasn’t stopped people from capitalizing on him.

It’s impossible to appropriate a meme, that’s the entire point.

Pretty soon some Pepes had grown Hitler mustaches and biblical types were talking about the three evil, frog-shaped spirits foretold in the Book of Revelation.

I was kidding, you assholes.

In other media bullshit grasping to maintain power in the world of blogging.

How the Alt-Right Grew From an Obscure Racist Cabal