Of course it does, even people like me readily own up to the reality, it’s rarer but can be more sadistic. Women don’t feel qualified to discuss male-on-male abuse, the same way we try to draw attention to the industries in general.

There’s even less sympathy there.

What do you think the drugs are for? All minors (or adult and with principles).

Props to the Guardian for actually owning up to this.

They aren’t all bad, all the time.
They have a duty to report on this, considering the luvvie set write for them.

It’s a shame Chester can’t see this. Come on, Corey, the iron is hot!

Note: this follows the SJW outing the white gay male from the victim circle. They don’t have to “keep the secrets” anymore.

Wall Street endlessly gushes about retirement. Its TV commercials show how wonderful life will be in our golden years—when we are old, yet still healthy and wealthy enough to go hang-gliding every day.

Meanwhile, out here in the real world, most working-age Americans don’t want to talk or even think about retirement. Often this is because they know they aren’t saving enough and probably will have to work until they drop dead.

This is the elephant in the room. 10,000 US Baby Boomers turn 65 every day. For most, life at that milestone won’t look much like the TV commercials.

I was reading this

because I wrote that piece on syphilis.

As well as causing infertility, syphilis can induce miscarriages and stillbirths. Some children born to syphilitic mothers will never show any signs of infection. Others die in infancy or develop serious health complications.

And antibiotics are failing.

And it struck me, wait, that continues on. It never disappeared.

Except women are still the ones blamed despite men counting more partners in studies (most sluts are men, mathematically and willingness plays into this) and there are links to psychiatric conditions.

No pill for ruining your legacy.

Top of my mind.

“It’s a very important paper,” says Karen Jones, a behavioral neuroimmunologist at the University of California, Davis, who was not involved with study. “It’s also really important to remember that not every mom who has HSV-2 is going to have a kid with autism.”

The idea virgin brides will prevent any STDs or medical grievances is absurd.
Chastity applies to men as well for good reason. Purity is physical?

This idea either sex can both have their cake and eat it is childish. Have it All is a lie sold to weaklings. Adults make difficult decisions, you don’t pop into the Perfect Husband/Wife mold overnight, it takes years and plenty of omissions!
To put your future wife and children at risk like that when sex toys exist should count as abuse, since abused children have similar problems, including catching the diseases of the parents.

The focus on women is based on the fact we carry, we aren’t the source of the problem.
That’s medically impossible to be both cause and effect.
Fresh infections cause the most damage. Whose fault is that?

It seems this one was skipped.

Which, which one has more children?

And that would be the simplest way to divvy, wouldn’t it?

maybe label it with letters or something I dunno

Automation replaces the only labour about 3/5 of the world can do.
https://disenchantedscholar.wordpress.com/2017/10/27/fun-iq-list/
Russia only cuddles up to China for its industry. Which has the superior culture?
In thousands of years, what have they created? Manufacturing is something a monkey could do better than a human if it weren’t for animal rights groups. When the industries aren’t demanded, what about the insane 20th Century population boom of the farmer regions, able to do nothing else?

They can all vote but less than half can produce net, more than they consume, than the lotus-eaters.

What happens to those people?

When their governments will be unable to provide charitable donation food?

The problem with AI has many layers.

What about the economies it totally destabilizes?

It would be like an alien announcing themselves, overnight change.

There won’t be any leisure robots. Do we have robot butlers?  The idiots are being sold on their own enslavement using their most predictable head-nodder, the Muh Dick method. We’ll have VR, like a WOW sub, most of the world won’t afford it.

AI that advanced WILL steal your job.

The military will keep the best, always does.

You’ll become a cyborg whether you want to or not.
Biometric ID cards were the first attempt.

Any deaths, like computerized cars, go down as a malfunction.

If someone’s paying to pimp your life, they want to own YOU.

China won’t ever eclipse America’s post-war success. America didn’t even deserve it because it was spared most bombing. China is too corrupt, too culturally dishonest, to be the standard currency.

Look at the attempts to repair the reputation

China already spends lavishly on research and development, and publishes reams of scientific papers. Spending on R&D has more than doubled as a share of the economy since 2000, reaching 2.1% of GDP in 2014, just below the rich-world average, according to the Organisation for Economic Co-operation and Development (OECD), an inter-governmental think-tank. Meanwhile, GDP itself has trebled. The OECD thus says China will be the world’s largest R&D spender by 2019. In terms of scientific papers published in English, the country is second only to the United States, and its output is rising by 20% a year.

If you’re wondering why so much medicine kills you.

But much of the published work is insubstantial, and a worrying amount is fraudulent.

http://reason.com/blog/2014/07/22/socialists-are-cheaters-says-new-study
Just do the studies and see.

Marxism was more toxic to the East than West, it plugs into racial differences.
This can never be changed.
https://www.theguardian.com/science/blog/2012/jan/31/socialists-conservatives-born-not-made
Allows the corrupt to float fake money.

But as President Xi admitted to the assembled academicians this week, science and technology remains “a bottleneck” for economic growth in China. The biggest problems are fraud and the academies of science and engineering themselves.

In 2014 China’s anti-corruption watchdog said it had “uncovered fraud in research grants managed by China’s Ministry of Science and Technology”. In April the British Journal of Clinical Pharmacology retracted an article by scientists from Dalian University, in Liaoning province, because it suspected the peer-review process had been subverted. In 2015 BioMed Central retracted more than 40 papers submitted by Chinese researchers.

The prevalence of fraud reflects poor oversight and a dodgy research culture.

But sure, I’m imagining it.
Why do we need honest science?

Where the joke came from 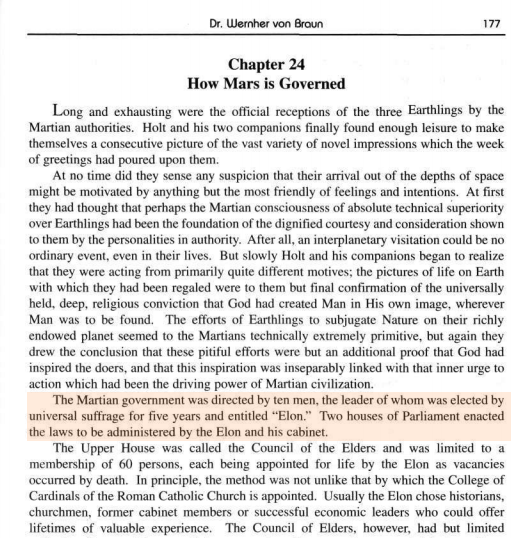 He planned this. I don’t know how, but he did.

This is good for food security. We export too much anyway. More patriotic policies and less bad news doom n’ gloom.

Who owns the Matrix basically.

I never tire of Zizek memes.

Such a chip could be a mark of the Beast if we’re going full tilt Bible Belt.

Someone stop this man.

What is he even looking for at this point? Can he stay married or even faithful to a girlfriend? Is he gonna be one of those weird middle-aged guys constantly chasing tail like it’s their youth?

Literally could be her father.

Was statistically perfect Amber not enough?

This is why you called Creepy Musk, man.

Sorry no, curing cancer at this point would not justify his behaviour.

Watch out – Elon’s about.

We’ll know if he gives her a car. A Tesla can be traced anywhere in the world.

Why do people get angry over Amber using a guy for money? But never for those guys using women for sex?

Bravo. To act like all women are hookers is indeed disgusting.

A gift is a gift, no strings. She didn’t force him and he’s a fool to expect anything in return.

He’s meant to be a big deal but I see no interview with Stefan Molyneux on the future of energy.

One hour man. You can spare one hour!

“The lessons of history would suggest that civilisations move in cycles. You can track that back quite far – the Babylonians, the Sumerians, followed by the Egyptians, the Romans, China. We’re obviously in a very upward cycle right now, and hopefully that remains the case. But it may not.”

“I’m personally a moderate and a registered independent, so I’m not strongly Democratic or strongly Republican.”

Yes because both are in fact cucks.

“I’m reasonably optimistic about the future, especially the future of the United States – for the century, at least.”

Are you buying it?

Update: I am about 20% taking the piss here. In the spirit of laughing at a billionaire.