Well, in most countries you banned guns and even most knives.
Considering we have half the upper body strength at best, we’re going to need something extra.

And without a flash of leg, breast or arm in sight, they still tried the ‘be less attractive’ tactic. Extraordinary. Well, with growing obesity rates, I guess women finally listened. Men are never happy.

If women get raped in countries that dress in hijab, I don’t think it’s really what she’s wearing rather than being guilty of Possession of Vagene.

Lust is no reason to attack anyone. The law used to reflect this better. 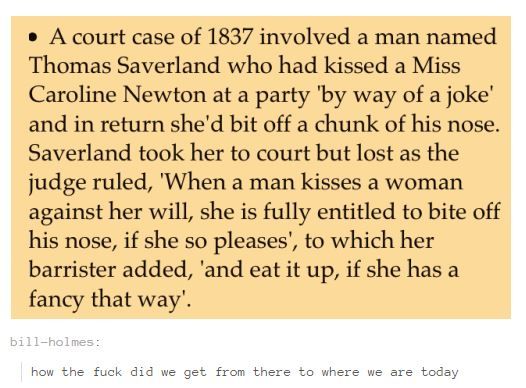 And if it isn’t sexual, or intended, abusively, to humiliate (sadism) then I would pay a small gang of raging poofs to follow that same man around for days doing exactly the same things.

You should be flattered! It’s a compliment! It’s a joke!

It’s like if a man gets kicked in the balls.

What were you wearing? Did you provoke them?

Well, maybe you should’ve been wearing a cup, you were basically asking for it!

Ask rapists not to rape? Ask ball-kickers not to kick!

Except even that doesn’t work because no bra – your nipples were showing, bra – too perky, self-control of a baby.
They say women complain about men but men always blame us for their lust. …It’s literally in your head, don’t be hysterical. Isn’t it special snowflake to ask an entire sex to un-develop their secondary characteristics because you refuse to stop looking?

I find it amazing men walk around topless and somehow women have the masculine reserve not to grope their tits.
It’s almost like desires don’t trepass on rights, autonomy is a human fact and any form of physical entitlement is repulsive (money, body, attention).