With over 270 million monthly users, Chinese technology company Meitu is in the business of vanity. The company has several apps, but their most famous one is MeituPic – China’s number one photo retouching app. It gives users the ability to alter their appearance with surprising flexibility and specificity.

Yet what is most notable about Meitu Pic is its uniquely Asian features and filters. There are functions to smooth skin, slim the face, add makeup, attach cute stickers, and enlarge one’s eyes.

And change their eye shape, by rounding it out, there’s no other way to do that.

And you thought Snapchat was weird.

I’m starting to think the guys who claimed a lot of makeup was witchcraft might’ve been right. If you’re trying to look like a whole other person… something ain’t right in the head.

While these selfie apps may differ in terms of functionality, they all help users to beautify themselves in ways that are telling about the markets they serve. They provide an interesting lens on how women in three East Asian countries view beauty ideals – and why certain beauty products succeed in an increasingly influential region…..

look more white has always been their ideal, prior to any contact with white people 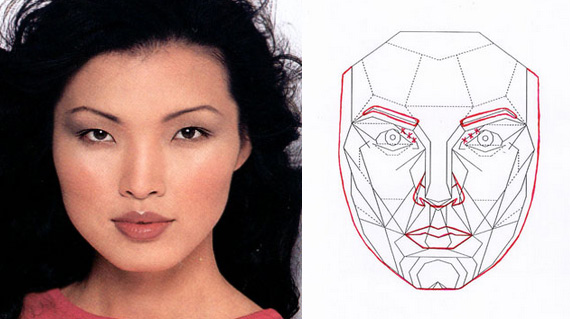 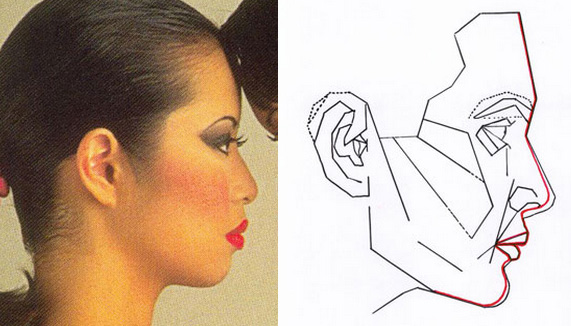 recessed chin there, in case you wanted to know what that was called

nose is similar to African, which has slightly more flared nostrils 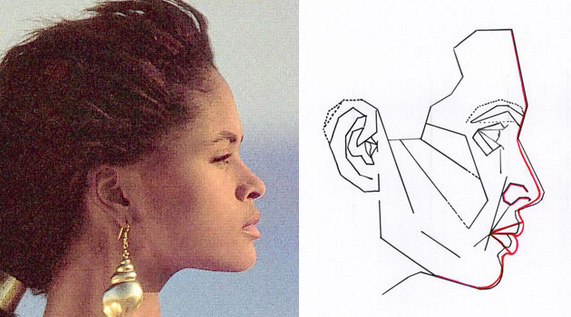 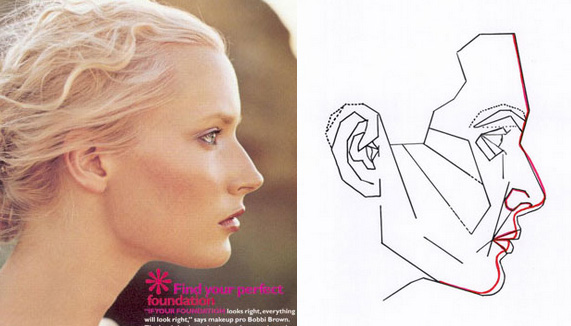 Do they mention this?

“Traditionally, East Asian women have been held to a standard of feminine beauty that suggests they should be sweet and gentle. “

Geisha were prostitutes, see other posts.

They were hookers. Not just strippers, there is plenty of art depicting them rolling around with men, penis out.

If they weren’t hookers, nobody would have paid that much for tea. Why did men never learn such a respectable ceremony, hm? Nor would they be depicted with their genitals exposed, like a hooker.

Asian men are broader too, it’s a racial thing before you go there. 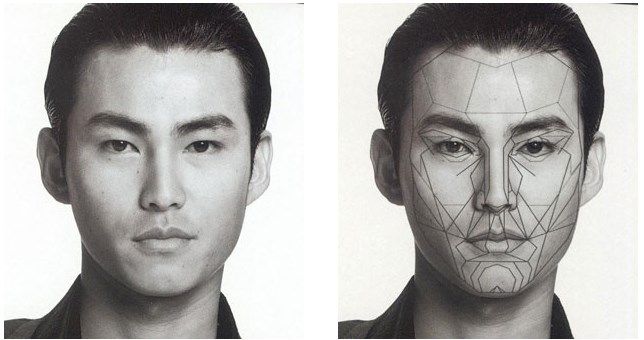 Oh, did you think these studies didn’t exist? Yeah, MSM never mentions them huh?
There is categorically less sexual dimorphism in Asians i.e. the men look more feminine, technically, and the women more masculine, since their range is closer in both cases to the androgynous mean.

Eyebrows also vary by race, Asians have that garish Audrey brow but naturally, softer. Flat as a ruler and pointing upward in surprise. Asian women do a lot to change this about their brows (normally by cropping the Shock Tail) because otherwise their eye shape looks more extreme (and alien to Western eyes).

Is this right? That isn’t the point, they do it.

This is the female mask, most beautiful of all races.

Which sex does that resemble to you? Now, which race?

Neither hips nor mathematics lie.

You can’t use plastic surgery women in a study of natural (genetic) beauty. Don’t be absurd.

Europe used to be full of those women. This is a Louis Vuitton advert.

It was the ideal of beauty for millennia.

You don’t get to claim that because someone got creative with a scalpel.

Asians don’t have eyes like that. Stop embarrassing yourselves.

I find it suspicious that whenever Asians study beauty, the result is always pedomorphic. There is never any sexual maturity (sexual dimorphism + maturity) in the features, which must be a deliberate, false omission of: high cheekbones, but gracile jawline (rare combination), cherry chin (strong teeth), larger philtrum than men (see Marilyn), smooth but not baby nose, full but not huge mouth, soft brows, higher forehead than men.

They erase all the masculinized features of their own women, it’s unfair. That’s an unrealistic standard.

The method is completely wrong, the aim of the studies is to search for an adult model, a real model. It’s disturbing many of their supposed results could be in primary school. Please tell me you can see a difference. Only the sexual opinion of (non-pedophilic) normal men (within a race) counts for these types of study into NATURAL, ADULT FEMALE BEAUTY (not popularity, classic beauty). It’s been proven you can only really perceive accurately your own race best. Nudging it into other categories is…morally dubious. Is it right to expect an Asian woman to look European? Is it right to expect every Italian woman to resemble Monica?

Yet I know sexually who men would SELECT – and that’s the problem, Asian variations of this study are prone to emphasize surgery and popularity. It isn’t historical or evolutionary (therefore instantly wrong, you cannot study it without this context). This is Darwin, accept it or don’t pretend to study it.

Some Western studies make the same mistake, fixating on Hollywood (celebrity, popularity) like they’re the best looking people you’ll ever meet (they are not, travel, they are actually subpar even within their own races historically).

They choose the Asian-specific features and say that’s the ideal, of all times and periods. …No? It reminds me of fat acceptance. If that were true, they wouldn’t be getting quite so much surgery to resemble a mulatto, at best (philtrum reduction). Both women listed in the Korean article have entirely the wrong bone structure, it is impossible to change the eyes and they are the root of the face. Bad nose jobs aside (like Paris Hilton’s and many stupid women, they got them done too small) their faces are too broad to fit (a racial trait), their mouth is ghoulish (too broad, too wide and fat lipped, Asians shouldn’t get injections it makes their eyes look tiny) and the face is too flat looking since it’s difficult to add (structure) where there’s nothing there.

For comparison, since I’m not denying Asian women can get very good quality surgery, power to them for hoodwinking the stupid marks with a fetish, here is a woman who resembles their template better.

Wang Fei Fei, but she is Chinese so they instantly discount her. Asians hate other Asians.

The stellar example of surgical improvement I have ever seen is this woman.

but she made it obvious with cleavage work so despite being Korean… they immediately discount her.

Their children won’t look like this and it isn’t hard to guess who they’re trying to look like.

Not that they’re getting surgery at all, no. I’m sure Scarlett Johansson’s nose is untouched, like Angelina Jolie’s….

so this isn’t a racial thing but a natural beauty point. None of these bitches have it.

They must wear contacts, for example, to hide the dead-eyed stare. Like a serial killer.

Pic or it didn’t creep me out:

Same huge-breasted woman as above. Instant loss of two points imho once she stops appropriating white women’s eye colours (phenotype range is important to classification). I would be scared to encounter that in an alley, she reminds me of a sexbot. Her neutral there looks murderous. On the contrary, as you can see, getting fuckdoll surgery makes a woman look far less innocent.

The entire purpose in all those cases to purposefully get surgery is sexual enticement (one husband or lots of boyfriends, doesn’t matter).

The breast work just makes it obvious to foreigners.

The so-called perfect Asian face is based on a genetic lie (surgery).

One Korean researcher decided to apply Asian features through computer graphics on top of the mask layout, giving the results of the “perfect Asian face”.

No. That isn’t how the mask works, the data is already infused INTO the mask, which can be separated by RACE and SEX. He has essentially scribbled over the truth with only the positive features of surgical, trendy women he wants to fuck. Is that science?

When I say scribbled I mean scribbled. And with the exclusions (so the whole thing is a sham), it fits white women better.

The “perfect face” has an egg-shaped head, big bright eyes, a narrow and sharp nose, and medium-sized lips.

Because the sampled women were all trying to look like THAT.

You can even see through the mask to the way it discounts Asian female features.

I hate noticing things, really. It’s such a burden.

Look at this horse-shit.

“Chinese herbalists have concocted special tinctures, tonics and elixirs for over 5,000 years to specifically address individual skin concerns. This knowledge has passed down from generation to generation and is what we use today to formulate many of our beauty concoctions,” Brian explains.

No, you’ve been giving them plastic surgery, developed in the West, not rubbing their face with tiger’s nuts. Next you’ll claim you invented pearls (Scotland’s had a roaring trade in them too before China stole cultivation methods in the last century).

Anglo-Saxons had herbalism too, you didn’t invent shit (you can’t take credit for inventing a fucking PLANT) but Cheryl Cole’s face is still pumped full of plastic shit. As it is, Europe has better biodiversity of plants and more (most) useful ones for skincare e.g. rosehip, lavender, orange blossom…

As for Fan Bing Bing (what kinda name…) any woman who relies on eye makeup to get her eyes to look that beautiful way…, isn’t actually beautiful?

The problem with so much deep, structural surgery is that with less makeup, it looks Uncanny Valley.

If you’re going to go to such great lengths to look like us, be decent enough to admit it?

Update: let’s throw this in, why not? re the philtrum and smaller mouth

When it comes to the face there’s just one shape-shifter and that’s the entire mouth area (i.e. upper lip, lips, and chin). The mouth area is capable of articulating many, many distinct sounds. Just like frequently using the hands, frequently using the mouth results in a slender, lean, and petite mouth, including the upper lip and chin. Also like the hands, disusing the mouth produces a loose, flabby, and enlarged mouth area.

The main muscle involved here is the one surrounding the lips, the orbicularis oris. If you’re trying to achieve a feminine face, I suggest speaking speak with great frequency and articulation. Not all languages are equal though—some neglect the orbicularis oris while others heavily rely on it. French, for example, seems to have a lot of words with the “oo” sound, like “beaucoup.”

Many more muscles that attach to the orbicularis oris (mouth) and I believe they are all gender-neutral, or slightly favored by males. This is my conclusion after observing many faces and seeing little to no sexual dimorphism in this area. This is much like limbs, between the chest and fingers or between the butt and toes. They are not nearly as sexually-dimorphic as breasts are to a male chest, but the muscles seem to be slightly favored by males. So the updated picture now shows the orbicularis oculi and masseter muscles in opaque blue to denote that they are greatly favored by men.

but cheekbones are bone structure, literally

well hold on the jaw is broader, larger and the lips thicken

The average female underuses the midface muscles and fully uses mouth muscles, which results in a pull towards the mouth. This produces a narrow nose, defined philtrum, small mouth, and narrow chin.

The entire mouth area is large and loose for men and compact and tight for women.

This is not my opinion as you can see but plainly observable fact. Women have a longer philtrum and smaller mouth by breadth than men. Ah, some troll demands, wouldn’t we observe this in Marquardt’s masks?

That is the most feminine face humanly possible.