What are the odds these xenophobic, genophilic whites are to be “honour” murdered, have acid thrown on their face or raped for wearing a skirt?

However, Professor Hewstone noted that the evidence suggests that people tend to make friends with people who are similar to them,

OK, when are you splitting up the gigantic Asian mobs at every Uni? No? Only white people again, huh?

The most noticeable finding is the lack of racial and sexual diversity among many Brits’ friendship groups. One in three white Britons (35%) have no friends from an ethnic minority background, while a similar number of straight Britons (33%) say they have no friends of a different sexuality.

I jest, I thought there’d be more cucks.

If they split acquaintance to real friend, the number of diverse circles would drop and the most racist groups are ~drumroll~ the Asian ones, unless you have money. For as long as you have influence.

They would, they actually would.

Except studies show TM – that when you force diversity on people, and it sucks, they hate multiculturalism more! The Left misread their own data, stereotypes get reinforced with proof by experience!

They’re trying to call Friends racist like Ross and Monica were white.

Meanwhile, white-majority in white country shows are more popular than ever (The Crown, Downton Abbey before, films like The King’s Speech). It’s almost like people will pay to see themselves on a screen. As K shifts, white people are preferentially seeking out media cast with their own group. Diversity fests struggle to get attention.

There’s so much non-white media, the non-whites themselves choose their own specialized type than a random pick n mix. Africans aren’t patronizing Asian films and Bollywood isn’t tuning into Nigerian cinema. What is this, cultural segregation?

~side-eyes Black Panther fans~ And that genophilia is natural, nothing to be ashamed of.

This graphic contains hilarious information. As usual, it’s poorly gathered. We expect that. 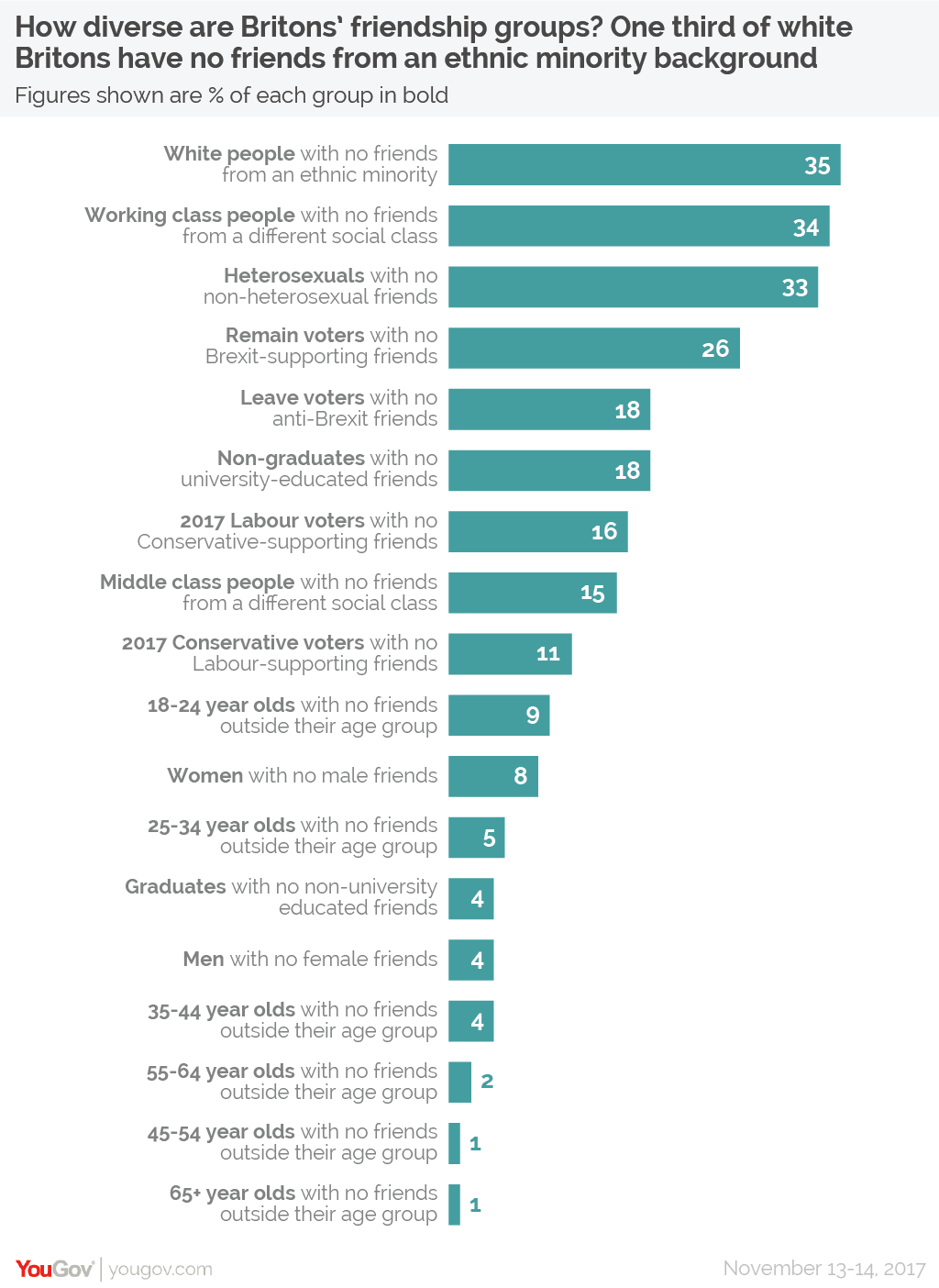 The middle-class shun the poor, women shun creeps who pretend to befriend them for sex, Labour voters shun Tories, Remain voters shun Leavers, wow, I wonder who the cunts are!

Where’s the poll on how many of us want to deport Guardian readers to Spain?

But many other groups make up a much larger proportion of the population, to the extent that many Britons should come into contact with them on a regular basis. Howevver, our data shows that significant numbers of Britons don’t have any friends of a different class, political leaning, or even gender.

This is news to me, in my echo chamber.

Among these more common characteristics, the biggest skews in Britain’s friendship groups are class-related. A third (34%) of people who consider themselves working class say they have no friends from a different social class, with 83% overall saying their friendship group was exclusively or mostly working class.

“middle-class people are cunts” you hear it all the time

All they do is talk about Ikea and drinking. When they aren’t sneering at your football flag.

Likewise, 15% of those who identify as middle class have no friends of a different class, with 75% overall saying all or most of their friends were also middle class.

That’s when they admit to being middle-class.

The most annoying part of the middle-class is when they deny it.

Friendship groups tend to be politically homogenous too.

That’s called bigotry because you choose your beliefs, unlike the other stuff.

While the nation split 52%/48% at the EU referendum, few people’s friendship groups see both sides represented so evenly. Only 8% of Remain voters and 14% of Leave voters say that roughly half of their friends take an opposing view on Brexit.

Of the two groups, Remain voters are more likely to surround themselves with people who share their views on Brexit. A quarter of Remain voters (26%) have no friends who want to see the UK leave the European Union, compared to the 18% of Leave voters that are not friends with anyone who wants the country to stay in the EU.

“How many of you feel personally victimized by a smug Guardian reader?”

Mind your Ps and Qs, never say cunt like the proles do, but sling bigot like it’s “the”.

When they don’t use the dictionary-accurate meaning of bigot, because obviously.
Their wrong use of bigot means not middle-class. It always fits.

Point out their classism when they sling bigot at everyone not like them and they shut right up. Short and sweet, “classist”. It works, repeat it and they always back down.

Similarly, those who voted for Labour in 2017 are more likely to have politically homogenous friendship groups than their Tory counterparts.

So much for the tolerant Left.

Wow, did they hate that meme. Struck a nerve.

Sorry….I seem to be unable to see the data for the number of white friends black or Asian people have. ? Did you not measure it or am I just missing it?

And many immigrants and foreigners prefer to live in their own monocultural community.

Ban monoculture hovels or make them go home. If they don’t want to be here specifically, doing it our way, they have no claim on being here (not that there was any before).

Here’s a couple of memes to resurrect.