with a mixed vegan boyfriend?

Say Farewell to the Klepto Queens of the British Far-Right

Yes, nobody saw this coming.

Lauren Southern gets her gender changed legally to mock transgender people. Accidentally does a great job of showing how open minded and progressive Canada is. from GamerGhazi

And those guys think literally everyone is a man.

They could see a pregnant woman and be like “the hands, man…”

White people have piano fingers, get over it. The only white people without long fingers have genetic issues.

But in this case…

Look at that Adam’s apple on 1. It’s huge. In 1 you can also see her ring finger is very long, longer than her middle finger in that picture. I’m guessing the waist is synced in, but we don’t really know.

I think her body looks very straight lined and boy in 3. It’s definitely not very big in the hips whatever it is.

Plenty of women are boney or lithe or gamine or whatever.

Small eyes obviously, and narrower than a woman with the same face, flatter shape, less sunk into the skull (which would be delicate), they cannot operate on the skull to make the eyes bigger so it’s a tell. Just look at Cumberbatch’s features and compare. There are women with good bone structure, but it isn’t the same as male structure. The eye area is KEY. Memorise this shape. 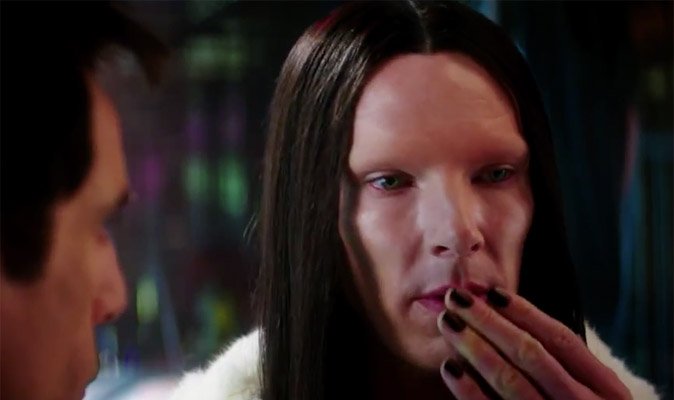 They use tons of eye make-up, thick liner to look rounded and female, trying to do a Marilyn cateye. That’s my own tell when I look, what would they look like without make-up? Like that Delphine trap, broad shoulder and no hips.

If you look at the Kibbe system, trannies usually try to ape Natural types most (shoulders, no hips) then Gamine (if small and thin) then Dramatic (drag look). Most go for Flamboyant Natural (probable here) or Flamboyant Gamine (model look). Soft Dramatic looks like a Vogue insect. Praying mantis Jolie type but she’s a Natural type.

Broad mouth, all men have a broader mouth than women, needn’t be thick-lipped.

Long upper lip skin (philtrum), weird mid-face that doesn’t fit the rest and/or bulbous head (jaw surgery) plus tan to cover male complexion up. Women are paler than men, within a race, due to estrogen.

They look weird in Classic or Romantic lines. They can’t wear actual styles of those women without looking weird, so they hate them. None try to look like Grace Kelly or Marilyn, do they?

One response to “Would that be the tranny Jewish boss?”