I knew my vote didn’t matter. Useful to know.
Now nobody can blame me when Brexit doesn’t happen.

Oh, maybe they’ll say it did … but you’ll see. Like 2016, when I said they wouldn’t let us leave. And people were like “they have to! We had a vote!” Well okay, we just had a second one. Wanna wait three more years?

Fool me once, shame on you. Fool me twice…

NWO pedos protect NWO pedos. City of London is a hub. The Tories will never let us be free.

It’s disgusting how many people held their nose and voted for the more covert people who hate them and allow the rape of their children. with generations of proof attesting to that fact. Starting to think whites deserve the genocide. For now I’ll assume it’s callow hope. For now.

I guess we’re all going down with the ghost ship of dead promises. Worth a try?

Fun fact: I don’t actually own a TV.

It is heartening they barely scraped the 326 needed. I sense propaganda money.

I think people need an economic correction to vote with their own interests now.

The list of traditional Labour seats falling to the Conservatives, some for the first time, continues to lengthen as the results from the British election pour in.

Exit polls which are restricted in the UK until the voting concludes at 10:00 pm immediately predicted a stunning Tory victory with 368 seats and the largest majority since 1987. Labour was projected to crash to 191 members, it worst return since 1935 and 71 lower than two years ago.

Prime Minister Boris Johnson will have received a powerful endorsement for his campaign slogan to ‘get Brexit done.’

It’ll backfire when he cucks.

Many of the Labour seats that switched to the Conservatives had voted to leave in the referendum of June 2016.  Labour’s opposition to Theresa May’s Brexit deal earlier in the year appeared to have cost many MPs their seats.

Sterling soared as soon as the poll was announced racing three figures to 1.3514 it’s strongest against the dollar since May 2018. The EUR/GBP fell almost two figures from 0.8454 to 0.8274 the lowest it has been since the weeks immediately after the June 24, 2016 exit referendum. The euro rose as well, adding about 50 points versus the dollar to 1.1172. 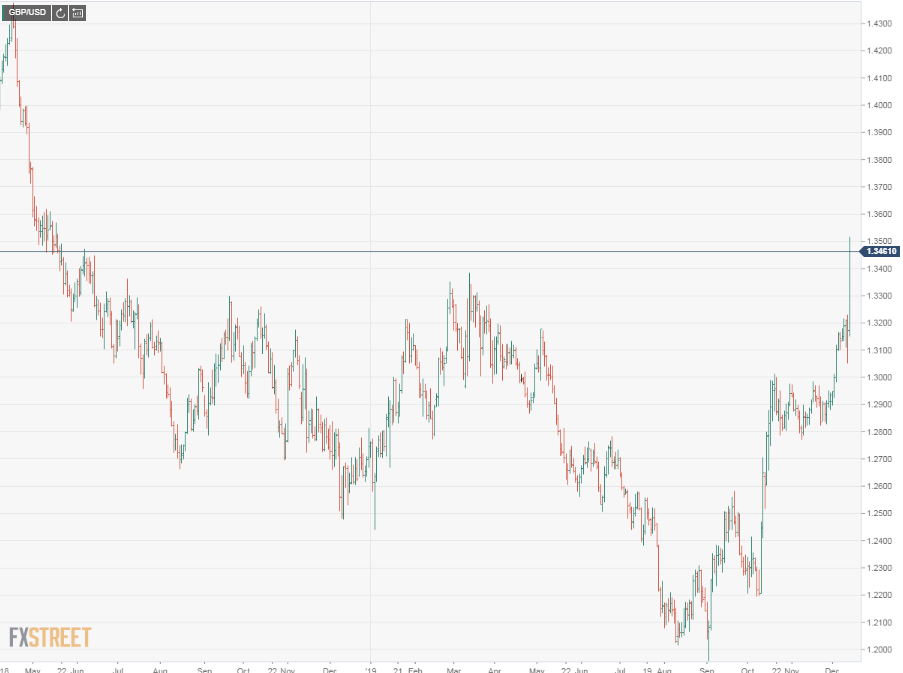 Mr. Johnson had aimed for an election since assuming the premiership following Theresa May’s resignation as the only way to break the deadlock in Parliament over Brexit.  Though the country had voted 51.9% to 48.1% to leave the EU a majority of MPs opposed departure. The shifting alliances of those opposed had worked to defeat three attempts by Ms May’s Conservative government to gain approval.

The election was a rout for the parties wanting to reverse Brexit with a second referendum. The Liberal Democrats who campaigned against Brexit were demolished and forecast to retain just 13 sets. Their leader Jo Swinson lost her seat to the Scottish National Party (SNP) challenger Amy Callaghan by 149 votes.

The SNP triumphed in Scotland, which voted heavily to Remain and was predicted to take 55 of 59 seats in the country.  Nicola Sturgeon the SNP leader favors independence and wants to hold another referendum but requires permission from Parliament for an official vote.

Brexit takes place on January 31st when the UK is scheduled to officially leave the European Union and Prime Minister has said he will  honor the date. The future trade relationship of the UK and the EU will be the subject of negotiations over the next year.

One response to “Hidden evil it is”