The information technology sector produces nearly 4 per cent of global greenhouse gas emissions — almost twice that of the civil aviation industry. By 2040, it’s predicted to rise to 14 per cent

Guess they’d better get off the internet with their veganism and tech detox.

BBC3’s Dirty Streaming: The Internet’s Big Secret estimates that watching every episode of the drama Peaky Blinders generates the same amount of pollution as driving from Birmingham to Manchester.

Meanwhile, internet users streaming the music video for Despacito, the mega-hit pop song by Puerto Rican singer Luis Fonsi, which has more than six billion views on YouTube, have already produced the same volume of carbon emissions as five African countries combined created in a year. 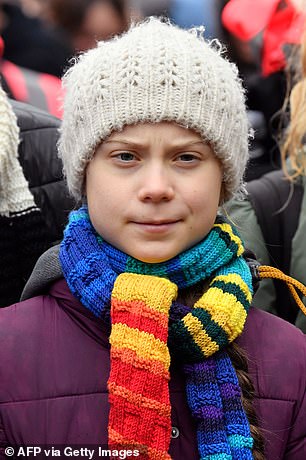 Aping your eco-hero Greta Thunberg, pictured above, you’ve just had an exhausting but morally uplifting day out protesting to save the planet

The reason why is that the films, TV shows and music videos, along with everything else we search, read and watch online, is sent to our phones and computers through underground cables from vast data service centres, often thousands of miles away, in an immensely energy-consuming process.

Adults did not know this?

I knew this as a child. Okay, I was a computer nerd, but still.

Do they think leprechauns make it happen? Probs.

breathing is a problem to this lot

Those thousands of data centres are largely owned by technology giants such as Amazon and Google.

Some so-called hyper-scale centres (of which there are now 500 and rising) are as big as a football pitch and house hundreds of thousands of computers.

Each of these needs to be running continually to keep the internet working, gobbling up electrical energy in the process.

Indeed, they produce so much heat that many are housed in the Arctic to save on cooling costs.

With more than half of the world’s 7.7 billion people now using the internet, the infrastructure behind it has inevitably become colossal.

The information technology sector produces nearly 4 per cent of global greenhouse gas emissions — almost twice that of the civil aviation industry. By 2040, it’s predicted to rise to 14 per cent.

(Something to point out next time a technology-addicted teenager piously berates you for daring to fly off for a holiday in the sun.)

In a telling illustration of the obliviousness of millennials to the environmental damage caused by their internet addiction, Beth Webb, the young presenter of Dirty Streaming, seems shocked by her journey of discovery.

we’re not oblivious, we’re not buying it

we know about the solar cycles

Travelling to northern Virginia, home to vast data centres that cover 13.5 million square feet and claim to store 70 per cent of the world’s digital data, she looks in horror at the local coal-fired power station that helps to fuel them, its chimneys spewing out carbon dioxide into a clear blue sky.

what about the horror of the phones she buys made by slaves? plantation phones