Some of us read.

I’m linking to this for a simple reason.

People get the timelines wrong.

It happens often enough that I’ve seen it hundreds of times.

No, fascism existed in this country prior to Hitler’s rise in the 30s.

Yes, the Second World War quickly put paid to it.

It’s a complex period of history that schools would do well not to ignore. Especially from their perspective.

The Guardian keeps saying things like “fascism should never be allowed to take hold on these shores” or some other bollocks.. it predates postmodernism. Stop it now.

Despite invasions by Saxons, Romans, Vikings, Normans, and others, the genetic makeup of today’s white Britons is much the same as it was 12,000 ago, a new book claims.

In The Tribes of Britain, archaeologist David Miles says around 80 percent of the genetic characteristics of most white Britons have been passed down from a few thousand Ice Age hunters.

Note the precision of language. That is a scientist.

Technically, there’s no such thing as British.

There was no British Empire, it was the English Empire. You didn’t see the Welsh fucking up anyone.

Despite all the Guardian articles trying to make out we were awful, the People aren’t fooled. 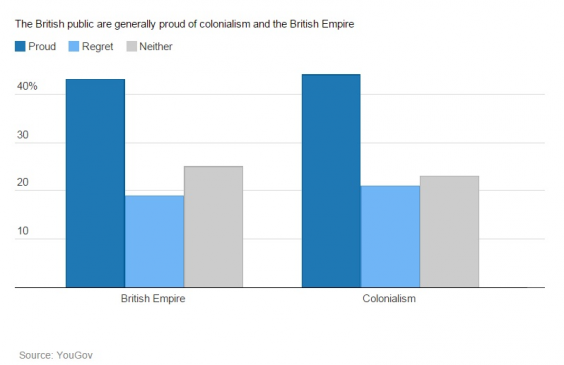 YouGov found 44 per cent were proud of Britain’s history of colonialism while only 21 per cent regretted that it happened. 23 per cent held neither view.

Americans don’t understand how political and meaningless the term British is.

Since the collapse of the Empire, it’s been meaningless.

People are either English, Welsh, Irish or Scottish. Sometimes a combination.

There are also little islands like Jersey that have their own flags.

Cooler than ours but derived from England’s original Three Lions heraldry.

The British is typically, Great Britain, and the union of the four countries is incredibly recent (Union Act 1707, 1800). It’s a term about what the Queen owns, similar to the UK but without pesky parts of Ireland.  Jane Austen’s novels are older than Great Britain. England is a country in its own right, Parliament and the Queen are based there. It’s the central country.

The British Isles covers the most landmass. It’s huge. It’s geographic and includes a lot of tiny islands.

So again, if you’re discussing where a person is from, to say they’re from Britain is technically incorrect. At least, what Britain? Great? Isles? What? It’s like saying someone is European, unless you mean the continent (correct but vague) you cannot mean the legal construct (EU) because nobody’s DNA originates from a legal fiction. There is no such physical PLACE. There is no DNA for Britain, (sometimes ancient Briton, as in the study above) but it’s either English from England, Irish from Ireland, Scottish from Scotland or Welsh from Wales. British is meant to be from Britain but nowadays everybody has a British passport, a passport grants citizenship and financial entitlements it changes nothing about your DNA. To refer to blood, genes and ancestry, you cannot be British. It would be like referring to your occupation, it’s a legal thing.

That contradicts your headline.

you’d be forgiven for thinking I’ve given up on the right wing.

Never real right-wingers and never my countrymen. Take a leaf.

You Yank bitches are still whining about Le Pen and Trump. You whine whatever does or doesn’t happen, it’s most unbecoming, old beans.

Fuck America generally, you didn’t want our help. Including mine, have fun calling all women thickos and calling for sharia because of your superiority complex. Keep your unique swamp of degeneracy. You aren’t repatriating here matey.

Kick away allies and who are you left with?

Using my own country as an example, link other data if you have it.

I already covered the historical norm of spouses within a couple of years of one another.

This is what K-types do, get established then select a mate.
Both sexes are most fertile but least stupid in the twenties. Thank the frontal lobes.
K-types need time before they marry to mature, lest they overbreed or starve their offspring from lack of resources.

The 20th century is the outlier here. With easy divorce, they married earlier and divorced earlier, to get married more often.
Trump, for example. Yet the re-marriage problem isn’t even addressed, let alone called a sin.
By self-proclamed traditionalists, who believe in marriage. Sure, Jan.

It would be great if Americans stepped out of their bubble and learned real history instead of the BS their schools lead them to believe. I have to keep correcting errors that would embarrass a child. Boomer Professors LIED. Their normal is NOT normal!

They keep doing this to my links.

So, based on the overall genetic perspective of the British, it seems that Celts, Belgians, Angles, Jutes, Saxons, Vikings and Normans were all immigrant minorities compared with the Basque pioneers, who first ventured into the empty, chilly lands so recently vacated by the great ice sheets.

There must have been an original people, archeologically.

I recall a gene study recently that concluded we’re very isolated from mainland Europe and very much inbred. The genetic similarity was intense.

The schools and academia seem to be the cause of this racist rot. Natives are being dispossessed, in a browner country this would rightfully cause outcry from liberals.

Unemployment in certain races is written off as a victim of circumstance rather than a possible lifestyle choice.

Christophobia? (now a minority in schools in their own country, scored down on assessments for being ‘too white’)

BTW The economy is screwed.  Some of these findings are not based on merit (IQ).

That’s why Brits (and many Europeans) are such pushovers, aggression has been bled out of us en masse. Years of painful torture and executions (interesting history) will do that to a gene pool. Especially the Islanders (Queensberry rules, chaps) who seem to naively believe the rest of the world gives a flying monkey’s about our imagined standards.

The whole purpose of prison was a genetic death, where they weren’t allowed to further contribute their genetic material to future society, depriving them any legacy (including voting); giving them conjugal visits and their spawn State assistance (doing their role of Provider better than they did) entirely defeats the point. This is why they were sometimes released – if they were castrated.

“The British do not expect happiness,” claimed English writer Quentin Crisp – and it appears he may have been right.

New research from the University of Warwick has indicated that Britons are genetically programmed to be grumpy.

The British, French and Americans are all predisposed to be grumpier than nations such as Denmark because they possess a “short form” version of the gene which regulates the amount of serotonin – the chemical which controls happiness – within the brain.

The Danes, who regularly top happiness surveys of nations, enjoy a longer form of the gene, while Britons and Americans, despite equally stable economies and governments, possess a shorter version resulting in a miserable attitude.

However, it could be worse: we could be French.

According to professor Andrew Oswald, who led the research looking at 131 countries, only the French had a shorter form of the gene.

Professor Oswald, who studies applied economics and quantitative social science, claimed many nations’ citizens would still be unhappy were they earning a fortune, living to a ripe old age and basking in the sunshine daily.

“Among the nations we studied, Denmark and the Netherlands appeared to have the lowest percentage of people with the short version of the serotonin gene,” he said to The Times.

He also claimed American individuals descended from Danish or Dutch immigrants were happier as a result of inheriting the longer gene.

The research, for the Economic and Social Research Council’s Festival of Social Sciences, found that genetics was the most important factor – but not the only one.

Happiness leagues generally use indicators such as educational standards, wealth, health, economic progress and job satisfaction alongside the weather, war and political stability.

– and if Scotland vote Yes to independence on Thursday, we still win.

I love these games.

To be clear, this is not what will happen after independence, it is what will happen if Scotland decides to stay as part of Britain. Whatever the outcome of the referendum therefore, Westminster MPs will no longer be allowed to legislate on these key policy areas in Scotland. How then can Scottish MPs at Westminster expect to be able to continue to vote on legislation which now affects England alone, and not their own constituencies? Why should a Scottish MP be allowed a say on an English law but not vice versa?

The answer, of course, is that in all rationality they cannot. That is the conclusion of Conservative MP John Redwood, who says 100 MPs back his proposal to allow the Westminster parliament to double as an English parliament when voting on matters that only affect England. It would then revert to a British parliament when discussing matters relevant to the entire union. Scottish MPs would be allowed to vote on the latter, but not the former.

…Seismic upheaval for the way English politics works is now guaranteed after Thursday’s referendum. A Yes vote means complete de facto devolution forced upon England. A No vote means England would surely have to answer the West Lothian question [my link] once and for all, finally preventing Scottish MPs from voting on legislation they have no mandate to have a say on. For English democracy, this is surely a good thing.