they go after everyone eventually

That email is the mask drop of personality disorders. I’m surprised they didn’t tell him to kill himself, that’s what these losers usually do.

Being a professional = Being a “Nazi”.

Wow. A clear example of the PC Code.

Useful idiots love to dehumanize, because dehumanizing is evil and you should be punched for being a “Nazi” because you triggered our Hulk RAGE.

if they could line up all the people they hate against a wall and shoot them, well, eventually the Left does this

“Liberals get the bullet first” – Marxists

That’s why the Nazis were Left. First thing the socialists did was lock up the Communists, they knew.

The purpose of the “warning” email is clear: if you won’t toe the Party Line, you deserve whatever we do to you, you have no human rights. It’s gaslighting, like the domestic abuser who says “you deserved it, you made me angry”. They don’t expect you to believe it, but their defense will be moralistic and oppressive (because they believe they invent good and evil, it’s narcissism).

I’m pretty sure a lot of these men/women/neither have a full suite of mental problems and use it as an excuse to crusade. It’s Crusaderism. There’s the sadism of crushing anyone who displeases you.

Because badfeels should be outlawed?

No, you are responsible for your own feelings, snowflake.

Gay men can be homophobic, according to an SJW.

Sure, it’s political, it definitely isn’t a religion!

It definitely isn’t a weapon to crush people they hate, obviously not!

Trying to ruin someone’s reputation and livelihood is illegal. It’s social and financial murder. Go after the witch mobs in court. It’s the ONLY way the control freaks will stop – if they lose control. These laws exist because reputation is important, it must be honest. The malice of the SJW will destroy themselves (but who cares?) although it’ll take civilization down with it.

There’s also incitement to harassment, especially on the basis of race, religion, sex.

This is why you already have de facto hate speech law, America!

Since when did random Twitter nutjobs have more power in a company than their founder?

Can we send these people a Youtube video under five minutes breaking down SJWAL?

Taking a short time off while Trump is here. DS out.

Survey says trash dove and the popular write-in entry, OP is a fag [1].

Told you so, ladies and goys.

Credit: Hol up hol up we dem goyz

The woman took it too far with the posturing afterward but tbh, that stuff’s wrong.

“Please you cunts deserve to be taken back to the 50s were [sic] you wil learn to know your role and shut your damn mouth.

“Do me a favour go home and slap your mother obviously your father never did it enough.

“I’d rape you if you were better looking but I wouldn’t fuck you.”

People keep expecting me to go after SJWs but this manchild needed to learn the lives of these people already suck, don’t empower them by letting them drag you down. Generally, they don’t deserve correction. The unoriginal bland humour doesn’t impress anyone.

She isn’t a public figure, there was no need to humiliate her and he doubled down well before she did.

Have they gone through his browser history cos I’d bet a million Australian dollars he reads Return of Kings. Those are exactly the jokes they make.

As in, not funny.

The same five lines about the kitchen, humiliation during sex, being worthless etc etc.

If you couldn’t shout those things following a person down the street without looking like the bad guy, don’t say them online.

If you have the facts, report those. He’s in this mess because he deserves to be, he gave his opinion and whined like a bitch when people listened to it.

He’s given the feminists exactly what they wanted, a fresh cadaver to jump over.

Brierley Newton told Guardian Australia the officer who called to tell her said Alchin was apologetic and had no prior convictions in what she took to be an attempt to convince her to abandon the charge.

Even if she were as right wing as Thatcher she should’ve gone through with it. She was in the right. He made her a target, he started it, he escalated it and goaded her into taking action. Sexual history reputation is the most vitriolic thing you can attack a woman with. That’s why they have it on the books, because abusive men will choose the nerve that hurts most, even if the woman herself has done nothing wrong, the mere rumour can affect her future prospects socially.

Fuck, you know these people are the scum of the earth when I side with the SJW.

Any type of monstering is wrong. White man holding a legal gun, white slut posting a Drake quote. We have to defend these freedoms for the people we don’t like. We have a rare case of a man monstering an SJW female.

After his arrest, Alchin admitted he had written the comments but told police he was drunk at the time and that they did not reflect “what he is about”.

Oh the Roosh V excuse.
“If I had a single drink, I can’t be held responsible for my dick because I have hypoagency all of a sudden, but the woman totally lacks the ability to give a valid No because the rules of consent are magically flipped for drunk bitches and if she’s drunk, she has more agency and No really means Yes.”

“He was internet trolling and was unaware it was a crime,” the police facts sheet stated.

That isn’t what trolling is, ignorance is no excuse. Trolling is subtle and based in truth. Volleying insults is not trolling. It’s verbal abuse.

Police put to him a specific comment he’d made, including that feminists “don’t get any action, so when you rape them it feels 100 times tighter”. Alchin said he had found it on an “anti-feminist website, to offend a group of feminists that were harassing me and my friends”.

AVFM was unavailable for comment.
These are not anti-feminists, they’re just misogynists. They never, ever go after the male feminists with power.

They hurt my friends, says the guy who sought out and targeted a complete stranger to mock to his friends.

You’re still responsible for your actions when drunk or DUIs wouldn’t exist. However, that caveat exists for operating equipment like cars or computers, not anything you do with your body, to which you cannot fully consent because you are not fully conscious. However, this applies to passive interactions, actions transgressing against the body of another are deliberate so counted. Otherwise every rapist would claim to be drunk – which they already do.

The Daily Stormer, “the world’s most visited alt-right web site”, proposed a different course of redress for the “hero and TOTAL BRO” Alchin. There is no suggestion that Alchin supports the broader views of the Daily Stormer or its campaign on his behalf.

A post in late June singled out Alchin’s “100 times tighter” rejoinder as “the perfectly natural response to being brutally oppressed by unhinged women your entire life”.

I really hope they’re joking.
If they think any type of harassment is a justified/natural response to a random woman, they need to remove themselves from the internet and check into therapy.

In October 2015, the 25-year-old was charged after he posted 55 derogatory comments in two hours, many directed at Sydney woman Paloma Brierley-Newtown. source 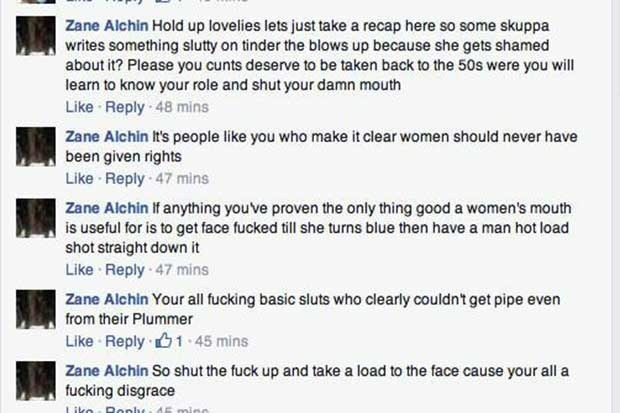 Speaking of, considering men commit most violent crimes by far and convicts can’t vote, if we’re taking Suffrage away from ANY sex, it’d be men. Men got universal rights around the same time as women and that can be revoked too.

I love how this type calls women a ‘fucking disgrace’ when he’s clearly a waste of air. If he’s a slut, he’s part of the same social problem he decries. At least those feminists were generally leaving him alone. Don’t pick a fight you can’t finish bitch. Women own the verbal smackdown.

“So glad the judge thinks I ‘over reacted’ so glad that when women stand up for themselves they’re either hysterical or causing far more damage to the poor ‘mens’,” she wrote on Facebook.

True, every time the monster mob goes after a man, these keyboard alpha bitches complain.
He picked a fight, he escalated, he dared her to take it to court. He caused the damage to himself by being a walking, shitposting piece of white trash.

You can’t build a Patriarchy with ‘men’ like that. Nobody will respect them, let alone follow them. When they talk about Patriarchy they mean a Sexual Revolution power fantasy.

That’s 55 messages in two hours. I’ve never known a player on the pitch to throw a sustained two-hour rant like that before.

They sneak in and ruin everything.

Maybe they could ease off on the SJW in their comics now.

The SJWs that don’t exist, they’re an urban legend, a myth. Like unicorns or the nuclear family.

Sure, the social justice tag exists, online, but this is 2016 and we don’t define a group of people by their belief system anymore, bigot.

More than useless, it is Kafkaesque, if you deny you’re a witch, you would say that, you’re a witch. If you admit any of it, any part of the story, it is used as evidence against you in the court of public opinion, an uncertain outcome becomes an inevitable defeat. These are not reasonable people. They hate you, and if they could, they would literally kill you. In fact, by encouraging rape, suicide and SWATing, that’s exactly what they’re doing.

Witch trial mob monstering cretins with literally nothing else in their lives will try to ruin yours. But you’re the fascist….

First they seek control. This never works. Then they move onto enforcement by force.

As a special treat, here is the Ultimate Test for Fascism, for your rhetorical use;

Hold an opinion they don’t like? They’ll ruin your life!

Social Justice wasn’t explicitly identified. This is not Victorian feminism lobbying for equality of opportunity, is it?

It’s like they’re afraid of a certain book. #SJWsAlwaysLie

A book that arms you against their fascist tactics of speech suppression and ruining your social lives (isolation) and livelihood.

I was browsing Medium (I won’t give you my profile link obviously) and I randomly came across this.

Naturally, I think it’s simple and comes down to 2 things.

This guy generally gets it without going into politics (social justice is actually a religion masquerading under politics).

…To explain, let me be clear what I mean by abuse. I don’t just mean the obvious: violent threats. I also mean the endless bickering, the predictable snark, the general atmosphere of little violences that permeate the social web…and the fact that the average person can’t do anything about it.

Gee, which group does that?

We once glorified Twitter as a great global town square, a shining agora where everyone could come together to converse. But I’ve never been to a town square where people can shove, push, taunt, bully, shout, harass, threaten, stalk, creep, and mob you…for eavesdropping on a conversation that they weren’t a part of…to alleviate their own existential rage…at their shattered dreams…and you can’t even call a cop. What does that particular social phenomenon sound like to you? Twitter could have been a town square. But now it’s more like a drunken, heaving mosh pit. And while there are people who love to dive into mosh pits, they’re probably not the audience you want to try to build a billion dollar publicly listed company that changes the world upon….