Liars hiring liars leads to corruption? NO. I thought they were pure moral virtuous people better than us and smarter who can never be wrong! Saints in different robes!

As I’ve covered most of the lies are in social psychology, which is heavily politically biased. It’s propaganda at this point e.g. Islamophobia bullshit.

But you get the politicians you voted for, for years.

Socialists can’t run a business, a church or a creepy hybrid of both.

You can put security guards at a socialist cafe or walls at Rowling’s mansion property, but don’t you dare guard the borders of the country!

Why do security guards exist if everyone can be trusted?

they go after everyone eventually

That email is the mask drop of personality disorders. I’m surprised they didn’t tell him to kill himself, that’s what these losers usually do.

Being a professional = Being a “Nazi”.

Wow. A clear example of the PC Code.

Useful idiots love to dehumanize, because dehumanizing is evil and you should be punched for being a “Nazi” because you triggered our Hulk RAGE.

if they could line up all the people they hate against a wall and shoot them, well, eventually the Left does this

“Liberals get the bullet first” – Marxists

That’s why the Nazis were Left. First thing the socialists did was lock up the Communists, they knew.

The purpose of the “warning” email is clear: if you won’t toe the Party Line, you deserve whatever we do to you, you have no human rights. It’s gaslighting, like the domestic abuser who says “you deserved it, you made me angry”. They don’t expect you to believe it, but their defense will be moralistic and oppressive (because they believe they invent good and evil, it’s narcissism).

I’m pretty sure a lot of these men/women/neither have a full suite of mental problems and use it as an excuse to crusade. It’s Crusaderism. There’s the sadism of crushing anyone who displeases you.

Because badfeels should be outlawed?

No, you are responsible for your own feelings, snowflake.

Gay men can be homophobic, according to an SJW.

Sure, it’s political, it definitely isn’t a religion!

It definitely isn’t a weapon to crush people they hate, obviously not!

Trying to ruin someone’s reputation and livelihood is illegal. It’s social and financial murder. Go after the witch mobs in court. It’s the ONLY way the control freaks will stop – if they lose control. These laws exist because reputation is important, it must be honest. The malice of the SJW will destroy themselves (but who cares?) although it’ll take civilization down with it.

Un-personing is against human rights.

They’re depriving a person of their livelihood, nowadays a social media presence is compulsory. They brought this about, they are duty bound to it. They serve US, all of us.

Terms and conditions do NOT apply above the state’s law and common law.

Terms and conditions are not legally binding documents until proven so. They are literally made up and “complied with” completely arbitrarily – not how real laws work.

These are ideological witch hunts.

300 years ago, they’d be accusing the prettiest woman in town of being a witch because she wouldn’t sleep with them.

I would question the moral code of these social media companies especially YouTube. I flagged content made by a YouTuber encouraging adults to sleep with minors (named kun Tyra or something) and YouTube kept the content up without flagging the channel for child endangerment. Let seek out this union and because this behaviour stinks to high heaven.

They are guilty of treason by acting as judge, jury and executioner, terms and conditions are NOT “enforced” because they are not a government. Nobody knows who they are, they are biased and nobody can vote them in/out. They are acting beyond their authority.

Internet access is a human right, it was proven in an EU court.

and the UN agreed

As in, “de-platforming” online is illegal. Equivalent to banning someone from a public park (speaker’s corner)!

Monopoly laws must be applied.

They are just a platform, the power is with the people.

They’re scared of him, which will make more people listen, the morons.

aka why hardly anyone links to me.

The best way to win on this is to push the classist angle.

They are. They’re keeping the lower orders in line. It’s all about classist brainwashing.

This isn’t like kicking a gadfly from a college class. That’s also technically illegal since they pay for the class.

You’re a utility, you can’t turn down anyone for service.

My electric can’t switch it off because they dislike my opinions on ketchup.

My water company can’t stop because my musical taste sickens them.

They are there to provide service. To serve. Censorship is illegal. Nobody signs up to be censored.

Social media FANG-type stock would collapse tomorrow if they couldn’t illegally handle your data and get away with it. PM/DMs/Email are privileged communications. If you’re speaking about medical issues over DM or to your lawyer by email, it is breaking privacy law (the human right) to scan or read it. They’re opening your letters.

They’re a public service. The Post Office doesn’t approve you for sending mail.

They serve the public. The public > Them.

Do you really think this info just stays in the companies? They don’t talk, compile hit lists, gossip to their friends about this one user?

This is why you already have de facto hate speech law, America!

Since when did random Twitter nutjobs have more power in a company than their founder?

Can we send these people a Youtube video under five minutes breaking down SJWAL?

Taking a short time off while Trump is here. DS out.

Source: Humans of the Left

This was led by someone (coughs) telling various SJW tumblr accounts about a show called Troll Hunters. And then you wait.

It reminds me of the cop shows intended to

What is this meant to be taking our attention away from?

Every single time stupid shit like this comes out, it’s a red herring.

Pat always nails it down with about a dozen nine inch nails.

I was going to call it passive aggressive censorship but I knew there was a term. 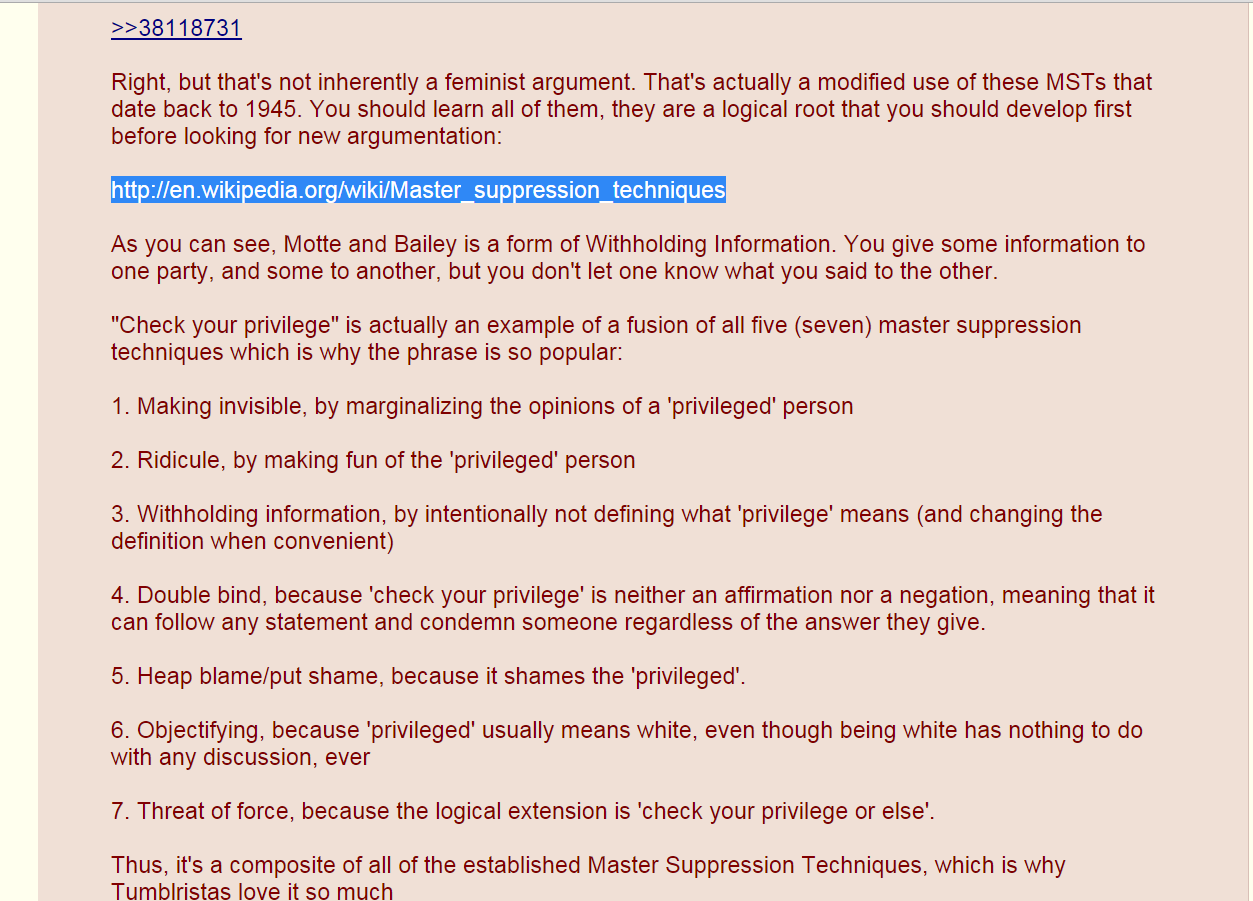 Their articles are brief but good, can’t quote without feeling guilty.