aka a select population of white people.

We examine the relationship between cognitive ability and childbearing patterns in contemporary Sweden using administrative register data. The topic has a long history in the social sciences and has been the topic of a large number of studies, many reporting a negative gradient between intelligence and fertility. We link fertility histories to military conscription tests with intelligence scores for all Swedish men born 1951–1967. We find a positive relationship between intelligence scores and fertility, and this pattern is consistent across the cohorts we study. The relationship is most pronounced for the transition to a first child, and men with the lowest categories of IQ scores have the fewest children. Using fixed effects models, we additionally control for all factors that are shared by siblings, and after such adjustments, we find a stronger positive relationship between IQ and fertility.

Furthermore, we find a positive gradient within groups at different levels of education. Compositional differences of this kind are therefore not responsible for the positive gradient we observe—instead, the relationship is even stronger after controlling for both educational careers and parental background factors. In our models where we compare brothers to one another, we find that, relative to men with IQ 100, the group with the lowest category of cognitive ability have 0.56 fewer children, and men with the highest category have 0.09 more children.

There are a lot of new readers who don’t seem to know how I roll.

My assumptions have statistical backing. Read up or FO.

My brain doesn’t instantly become thick because you dislike an opinion it produces.

I’ve spent years proving myself on here, with a variety of good predictions (the refugee crisis, African demographics, Brexit, Trump etc). Your incredulity is not required.

With a fertility rate like theirs, property should be cheap.
But Bitcoin isn’t a bubble.
http://nordic.businessinsider.com/bitcoin-mining-electricity-usage-2017-11/
Ironically, if you’re in the very situation you’d need crypto, there’d be no electricity to access crypto.

Is anyone surprised at this point?

Why did Labour lose the last two elections? Not just the one after Rotherham?

The strongest evidence for conspiracy comes from one of Labour’s own. Andrew Neather, a previously unheard-of speechwriter for Blair, Straw and Blunkett, popped up with an article in the Evening Standard in October 2009 which gave the game away.

Immigration, he wrote, ‘didn’t just happen; the  deliberate policy of Ministers from late 2000…was to open up the UK to mass immigration’.

He was at the heart of policy in September 2001, drafting the landmark speech by the then Immigration Minister Barbara Roche, and he reported ‘coming away from some discussions with the clear sense that the policy was intended – even if this wasn’t its main purpose – to rub the Right’s nose in diversity and render their arguments out of date’.

Multiculturalism has failed.
Swedish feminists are moving out of No-go zones full of Muslims they voted to welcome.

That seemed, even to him, a manoeuvre too far.

The result is now plain for all to see. Even Blair’s favourite think tank, the Institute for Public Policy Research (IPPR), commented recently: ‘It is no exaggeration to say that immigration under New Labour has changed the face of the country.’

they leave as soon the economy properly tanks

or they’re drafted into a war

the interesting part will be going after what they owe this country, once they’ve left

never piss off the white people, it’s world war or nothing

It is not hard to see why Labour’s own apparatchiks supported the policy. Provided that the white working class didn’t cotton on, there were votes in it.

Not to earn the core voter base back.

But to continue betraying them by importing rapists for their daughters.

The WWC is proud, in a word. They do not forget grudges over generations.
WWC votes are often the Kingmaker in FPTP. That’s why Labour backed altering it.

Research into voting patterns conducted for the Electoral Commission after the 2005 general election found that 80 per cent of Caribbean and African voters had voted Labour, while only about 3 per cent had voted Conservative and roughly 8 per cent for the Liberal Democrats.

The Asian vote was split about 50 per cent for Labour, 10 per cent Conservatives  and 15 per cent Liberal Democrats.

That meets all the criteria for treason.

Giving people citizenship on the probable basis of how they’ll vote.

Don’t let them go. Based on what they voted for (aka this), force them to live among the joyous diversity they foisted on their kinsmen.

Why should white countries take them in when it’s clear they’re dysgenic cancer? They’ll call for the same policies that made their own a third-world hellhole and raped their own people? It’s the white equivalent of the dopey Muslim, an apostate that’d be thrown off a building preaching religion of peace.

Never import people from a country you wouldn’t want to live in. Basically, only import neighbours or at least limit to your continent, evolution happens for a reason.

Why does nobody just stay and fix it? – the K.

There is nowhere left to run. White people been running at least half a century. White Flight is over.

Bloody r-types have nowhere to migrate to. The money is gone. The rats have nowhere to build another nest, that’s why the in-fighting. They’re competing for the first time ever as the gears grind to a slow halt.

They voted for it. They wanted to invite the third world and those people brought it with them. They should be forced to stay and suck up the consequences of their actions, like adults. 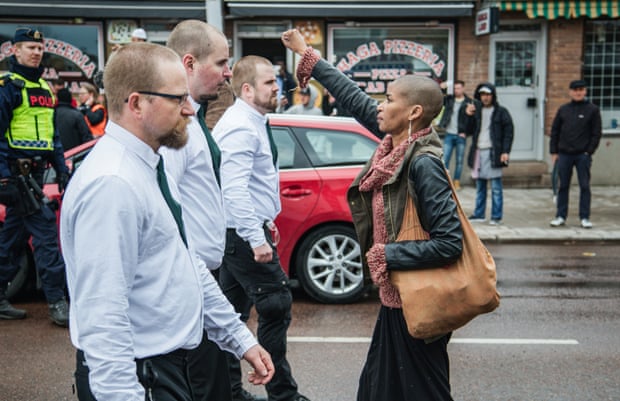 I don’t believe The Guardian is allowing comments on this. Study and ponder why this might be.

Most of the ‘anti-fa’ have stopped marching, now they’re being met with true resistance.
There’s always one rabbit dumber than the others.

Sweden’s pendulum is swinging back fast and hard, one man (or woman) cannot change that.

A black woman won’t change their mind, maybe a blonde with big tits, and that level of self-importance will get her killed. Sweden is going that way whatever your triggering on the subject and standing in the street will make you a sitting duck. This is not 20th century politics. You cannot expect that threats of violence will not be taken seriously, eventually. She was interrupting what was obviously a peaceful march and they’re doing the right thing by completely ignoring her. That is how Swedes will see it. They will not side with the aggressive foreigner.
Telling native Swedes they can’t walk peacefully in their own country, ordering them around, is part of the problem, if anything she’s helping their movement, the dumb bitch.

She has no right to be angry, it isn’t her country.

Aside from these facts of the matter, the most curious response was the police.
They are assisting neither side.

That is a win for the right.

Whatever happens, you have one small comfort.

Hey, at least nobody called you racist.

The numbers will get worse in spring. Resistance is too late.

“The injustice, the housing shortage, the chaos surrounding refugee housing units and the sharp slide of Swedish students in PISA tests — all these changes have caused the Swedes to become disillusioned.”

Low IQ detritus will drag down the natives, yes.

I wonder if Agenda 21’s focus on indigenous peoples will be implemented?

The tolerance of the elder generation was born of ignorance. They assumed everybody was just like them. Their children are experienced.

Be careful what you wish for, Exhibit A.

They can’t be over-estimating their numbers, they must have weapons caches to even it out.

What invasion? Where are the weapons, they ask.

I have heard things but I don’t want to get into trouble. Two main rumours are they’re being taught how to improv weapons like prisoners do shivs. They might go after high profile figures or landmarks. The other is that the black market has been planning for this within the EU but supply is drying up in urban areas because everyone wants to protect themselves too but the most law-abiding refuse to break the law.

This will end well, says no one.

Good. Let it fall. It must stand as a testament to what happens when these foolhardy theories are applied. Don’t whitewash it, don’t excuse it, don’t try to salvage a picture in your mind or prop it up due to your mistaken notions of national pride. Let the horror stand. Let those who built it see what they created. In working to support the system, you prolong it.

Most ideas don’t scale up. A system precluded by decent citizenry cannot replace those people (or those Other people would have imitated the same system by themselves). Meanwhile: http://www.bbc.co.uk/news/world-europe-34602621 A sword is just a big knife, an inept weapon in the age of guns, you can’t ban knives.

At this point, the once-good institutions are too corrupt. It might appear nicer than non-European corruption, but corruption with a smile is more insidious. You don’t need that pension they’ll say as they give the money to the migrants. http://www.thelocal.at/20151014/refugee-crisis-to-cost-austria-1-bn-in-2016 Note: that’s just getting them into the country.
Foreign aid was the original White (Man’s Burden) Tax, this new immvasion tax should be argued on the basis of Original White Man’s Sin (being born) in a position of (presumably genetic) privilege. It’s for your own good, they say, as they approach you with the euthanasia needle, because the aging population is expendable. Your kind are an evil to be purged from the world, cry the fools who expect the machines will run themselves.

This is how civilizations fall. Much like buildings. You hear the odd creak and crackle, slowly at first, then one day, the whole thing goes all at once. How’s the other lefty examplar doing, Venezuela, where they’re being told to eat rocks? Can we award Darwin Awards to entire countries? #CastamereCulture

What is the solution? Deportations are too obvious. What caused this problem? Who propped up multiculturalism, the theory that made it happen? The PC po-mo that made it all possible?

For the last few weeks, the central train station in Sweden’s third largest city, Malmö, has been overrun with migrants; the volunteers that for the first few days showed up with food, water and clothes now seem to have lost interest.

Deport the traitors too and you’ve solved the problem. Better yet, force them to bear the entire brunt of the cost – all the financial cost, all the overcrowding, all the knock-downs on waiting lists, pass the debt down solely to their descendants. Make them responsible for their actions, what they wanted and who they voted for. If they think their homeland is so bad, or everywhere else so good, they won’t mind leaving, will they?

I’ve given up, it’s too far gone. I’ve stockpiled books for when the internet lines are cut or power shortages happen: http://www.bbc.co.uk/news/business-19842401

They had their chance. We owe them a trial, at best. Like Nuremberg, only this time we’ll have all their vapid social media posts as exhibits of their outgroup preference. Punishment for genocide or calls to it (incitement)? Death or exile. I would love to see how the feminists do in Saudi Arabia, which will go broke in about 5 years btw.

Like the sassy black women say, what we need to say to these people when they beg for our help, using our national ties as emotional blackmail when we know they don’t believe in them;

*in the distance, machete noises*